Last week, Siam Commercial Bank (SCB) partnered with Digital Ventures – the bank’s fintech investment arm – to host Thailand’s first-ever fintech investment forum titled “Faster Future SCB FinTech Forum” with an overview of SEA markets and fintech trends in 2017. In what is intended to become an annual event, world-class guest speakers held discussions on the emergence of China as a global center for innovation in technology and fintech, the prognosis for SEA markets over the next 3-5 years, and venture capital investment for corporates in Asia. Techsauce was present at the event to bring you a quick overview of the highlights. We also captured an interview with Thana Thienachariya, head of Digital Ventures, who shared with us his vision for fostering Thailand’s fintech ecosystem.

SEA statistics and trends to look out for in 2017

The conference kicked off with a session by Jeffrey Paine, Managing Partner and Co-Founder at Golden Gate Ventures, with whom SCB made its inaugural fintech investment last year. Paine, who is one of SEA’s best-known VC gurus, gave an in-depth overview of how the region’s startup ecosystem is looking at the outset of this year. Jeffrey Paine, Managing Partner and co-founder at Golden Gate Ventures, also shared noteworthy insights on the hottest fields that we can expect to take off in SEA over the next 3-5 years.

Is China the new Silicon Valley?

The forum also featured a panel uniting three investment strategists with the scoop on China:

The guest moderator for the session was none other than Paul Ark, Managing Director of Corporate Venture Capital at Digital Ventures and one of the leading minds in corporate investment for SEA. “A lot of governments around the world have set up sandboxes in which startups can innovate; I would argue all of China is one giant sandbox.” – Wei Hopeman, MD at Arbor Ventures

“If we name R&D capability, access to capital and the people side of the equation as the main drivers of startup economy, then China exceeds Silicon Valley in that it has even more people.” – Grace Yun Xia, Senior Director, Corporate Strategy and Investment at Tencent

“A lot of people still come to China thinking the law mandates for them to have a local partner. There’s some sectors where that is necessary but it’s not every sector. So look for a partner that adds value. But sometimes a local founder can also play the role to tell you that China is not the market for you! One company – in experimenting and trying to start in China, ended up realizing SEA is actually the right market for them and a better fit. And they did that through a pivot of US-China, China-SEA,” – Oscar Ramos

“The uniqueness of China is having local tech giants like Alibaba, Tencent, Baidu – and those giants play an important role in shaping and fostering ecosystem in China. All those companies are moving from core product ecosystem to collaborative ecosystem. To build that ecosystem, requires a lot of cross-industry acquisitions, investments and partnerships. All the platforms enroll in a lot of innovative startups to provide end-to-end user experience. Because all the companies work together, they are partners and at the same time competitors,” – Grace Yun Xia, Senior Director, Corporate Strategy and Investment at Tencent

“China plays a significant role. If there is a chance to visit Chinese companies, startup founders should!” – Jeffrey Paine, Co-founder of Golden Gate Ventures “For a bank with $80 billion in assets… spending money on accelerators and hackathons is a drop in the bucket, but it can mean life and death to us – that is part of why we invest. It is also a way to source potential acquisitions.” – Paul Ark, MD for Corporate VC at Digital Ventures.

“VC in Asia is no longer an emerging thing; it IS a thing.” – Paul Ark

A chat with the head of Digital Ventures

At the end of the conference, our staff pulled Thana Thienachariya, executive chairman of Digital Ventures aside for a quick chat. “Digital Ventures is a very flexible unit,” he shared. “We support the fintech ecosystem in many different dimensions.” 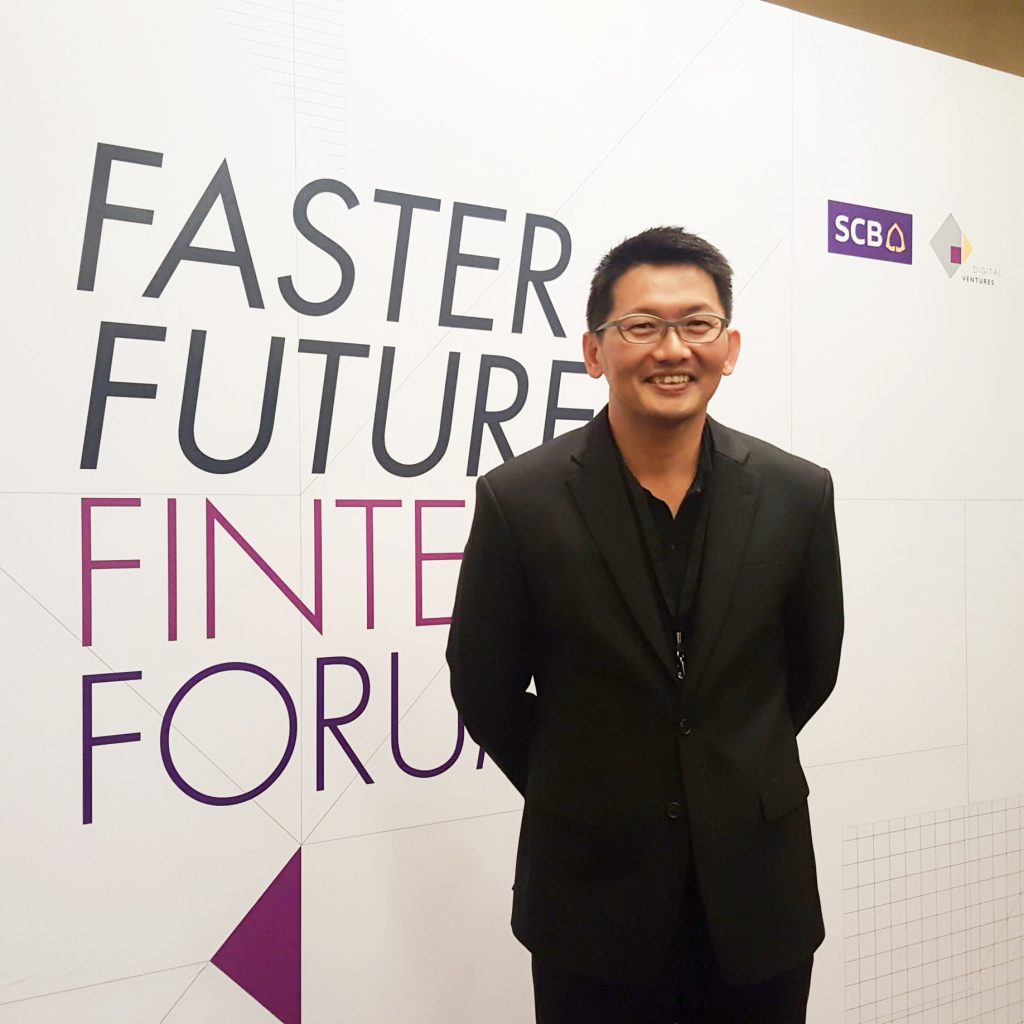 In terms of investment – “Right now, we’ve already made investments two funds abroad with Golden Gate Ventures and Nyca. Globally, we’ve spotted a lot of very promising startups. In the future, we will probably have opportunities to invest in these startups that illustrate so much potential. Aside from this, we have also directly invested in Blockchain startups such as Ripple in order to grow our roots and business network in fintech ecosystems abroad and to garner insights for SCB. We want these developments to reach the bank’s customer base in the Thai business sector so that we can transition forward into the digital era together.”

In terms of support for startups – “We have opened an accelerator that functions as a school to pass on knowledge to startups in our program. We draw in partners from large corporations to help open these startups to business opportunities so they can grow further. This year, once the current batch graduates, we will start with a new batch of startups.”

In terms of giving back to the community – “We’ve created online media channels to share insights with those who are interested in technology and fintech, where we introduce various topics that people currently show an interest in such as blockchain and machine learning. The main goal of the ‘Faster Future SCB FinTech Forum’ was to perform business matching between the bank’s clients and partners and to foster a stronger network.”