At Techsauce Global Summit 2017, four influencers in the tech world with differing backgrounds and areas of expertise came together to tackle the topic of failure – a word which can instill fear even in the strongest of human hearts, and something which most startup founders – especially the most successful ones – are no stranger to.

Though most humans are born with an innate aversion to failure, no one can argue that failure is often inevitable, and also something that no startup can do without in its quest for success and growth. In fact, if we allow it, the most devastating failures can often propel a startup and its founders to the biggest successes in their journeys. Our panelists gave insights into what we can all do as startups to learn from failure, leading to growth and building sustainable, concrete futures in business. Lalitha started off by asking the panel to define start up failures from experience.

How do you convince start-ups in your portfolio to stop ‘flogging the dead horse,’ so to speak and move on?

Creel: It’s not easy – they have been pitching their business for so long that they have started to believe that their figures and projections will work, when in reality they won’t. We are big on reality checks to entrepreneurs. As much as we love investing in businesses, we equally love encouraging personal growth and achievement of success. We want to raise awareness for their blind spots.

Lalitha pitched the next question to the panel to give specific examples of failure that they themselves have gone through as founders or as investors.

Creel: Paul from Digital Ventures was talking about the perfect storm and we always talk about the ‘start-up storm’ which essentially means first time founders starting out in an industry they have never worked in before, on a service or product that no one has ever heard of which involves critical mass and huge investment straight off the bat – if you have five of these factors working against you, you are going to fail. It’s surprising how many people pitch these types of concepts. I would advise going for the cockroach business, rather than the unicorn business to start with. Get your experience and then the second business could be the unicorn.

Meng: Most success stories are second time founders; they are seasoned, they have experience, so they succeed faster the second time around.

Sam: A lot of them kill it on the first business, because you can’t have a mentality that ‘this one isn’t going to work but I’ll learn the skills for the next one.’ You can’t approach a business like that, because then it won’t work and your learnings aren’t as valid as if you had given it your all. Mindset is a key player.

Creel: It’s not saying you are going to fail – just maybe downgrade your expectations, if you have never been in business before. Michelle: Some of the surprising factors of failure is having too high a focus on structure and planning and on detail. Those who spend a huge amount on planning and creating detailed business plans tend to fail more as they haven’t gone out and done the research in the market that is critical to find out if the market wants your product in the first place.

Those who spend a huge amount on planning and creating detailed business plans tend to fail more as they haven’t gone out and done the research in the market that is critical to find out if the market wants your product in the first place.

Sam: It’s not failure if you learn; it’s understanding and tweaking the mistakes that will ultimately lead to something big.

Creel: We have a kid’s foundation where we train 8-12 year olds in over 700 schools. One of the experiments that we get is called ‘the Marshmallow Challenge’ where they have 18 minutes to build the tallest structure out of spaghetti. What’s interesting is – and this refers to Michelle’s point about over-planning and focusing on detail – is that the worst performers in this challenge turn out to be MBA graduates as they spend so much time planning and not executing, whereas the young children take a lot more action and complete the task much faster.

Michelle: A lot of early stage ventures focus more on initiation and action rather than detailed planning so taking that idea and jumping into the market and testing all the time and experimenting. Yet as the business matures, the need for detailed planning goes up.

This is a very poignant message that – startups specifically – should not worry about the detailed plans. Instead, they should focus heavily on market research and deliberate action to learn out their chosen market of business to either succeed firsthand or fail quickly to learn for the future to succeed faster.

A lot of early stage ventures focus more on initiation and action rather than detailed planning so taking that idea and jumping into the market and testing all the time and experimenting. Yet as the business matures, the need for detailed planning goes up – and this presents a challenge. How can they strike the balance between their action-focus and planning?

Creel: The things that can stop you in business are a superiority complex and arrogance – or the complete opposite: suffering from an inferior complex, feeling like you won’t be successful. You don’t want any of those things. Thinking rationally and realizing that it’s going to be hard but giving it everything anyway is the best way to learn and succeed.

How do you pick yourselves up after failure, either as a founder who failed or working with a company that failed and looking at their journey?

Meng: One example is that of a company that applied to dtac Accelerate twice and kept applying and hustling – so, there is something to the ‘fail fast and success will follow quickly’ mentality. Good start ups learn from their failures and come back even stronger.

Sam: There is a way to hedge against failure and to optimize it by coming back & moving on. I started out as a corporate lawyer and then moved into FinTech and working with startups which is a completely different ball game. So, there was a period where I had to upskill and understand small companies. The way you hedge while you are learning is to do multiple different projects at a time. I worked with multiple different startups working with different departments, whether it be marketing, tech team, project management, or whatever I needed to do to understand what I enjoyed and what I needed to improve in. It’s key that if you are working and learning in multiple different areas and taking what you have gained and applying it to all areas your chance of failure significantly diminishes. Do you think some start-ups and different kinds of people have a limited runway in comparison to corporates who have a larger investment and a huge runway?

Meng: Yes, this might be the case. However, the great entrepreneurs always come back. If they have strong passion and resilience they will try again.

Creel: When we had a startup 20 years ago there was no funding and we had 5,000 dollars each. A lot of start-ups forget that there is so much more funding available now.

Michelle: My experience of moving on after failure was learned from working with entrepreneurs, start-ups and my own failures. The biggest loss of failure is the loss of the dream of what you were going to achieve or the loss of contribution you thought you might generate. Like any grief in our life we must sit with it, and by having a coach or a mentor they can sit with the wound and give guidance on how to proceed as they too themselves will have gone through the same failures and offer sound advice on how to proceed.

The biggest loss of failure is the loss of the dream of what you were going to achieve or the loss of contribution you thought you might generate.

Creel: My first business went bust 18 months after starting, which was tough to go through. My business partner and I made a deal that we wouldn’t take any money out of the next business until we had paid back all the debt and it gave us renewed faith in ourselves that success would come later.

Meng: In Thailand we are very lucky as we have cash and support from the government for startups. We have excess cash; however, the problem is finding good, talented startups that can last, which is lacking.

Sam: For some entrepreneurs, if they lose or fail at what they are working on they are in a difficult position in comparison to corporates, as many entrepreneurs & startups don’t have the capital or the backing. However corporate start-ups can get shut down quickly as well. If people invest in a project and it fails, then the people who are writing the checks can withdraw very quickly.

Final thoughts – what are your most surprising thoughts from start-up failures?

Sam: The most prominent thing is that acceptance of your failure and being mindful of it is crucial – the people who do this succeed highly in any industry. Tim Ferris is a key player in the entrepreneurial field, offering his advice and several stories of high performers that have failed a lot. Sports is a great way to look at loss and failure. Michael Jordan has this great Nike advert where he says, ‘I missed 9,000 shots and missed time and time again and that’s why I succeed – because I fail.’ Understanding that you will fail, accepting it and looking to see how do I learn –that’s the way you see the first start-ups going to their second and third ventures quickly. We have all seen the businesses where they fail 5-6 times and they become the perennial failing founder. Understanding that you will fail and continue to learn and keep moving forward is the key.

Creel: Having that hunger for it, knowing that ‘success is the best form of revenge’ will encourage you to keep pushing forward after failure. Educationally, across the world, we cotton-wool our kids too much. Everyone gets a medal and treated uniquely and as winners. If they haven’t experienced failure and they hit 25 and fail big time it’s all over. They can lose it and get depressed and it’s important that we embrace failure.

Educationally, across the world, we cotton-wool our kids too much. Everyone gets a medal and treated uniquely and as winners. If they haven’t experienced failure and they hit 25 and fail big time it’s all over. They can lose it and get depressed and it’s important that we embrace failure.

Michelle: Clients have come to me and said, “I haven’t ever failed; how can I succeed?” Failure is the critical ingredient to having grit and to genuinely embrace it. Certain things won’t go as expected and things outside of your control will happen – just accept that it’s a normal part of the process.

It is very valuable to talk about failure and embrace it and to not stop in the process. It’s comforting to have such a successful panel share their own personal experiences of failure as it instils hope into the entrepreneurial stratosphere that failure is not something to be feared. If we choose to learn and grow from it instead of taking it as defeat, then we can only succeed in the future. Blockchain and cryptocurrencies have made their indelible mark not just in the cyberworld, sending sonorous waves throughout the financial sector. As these technologies advance, th... 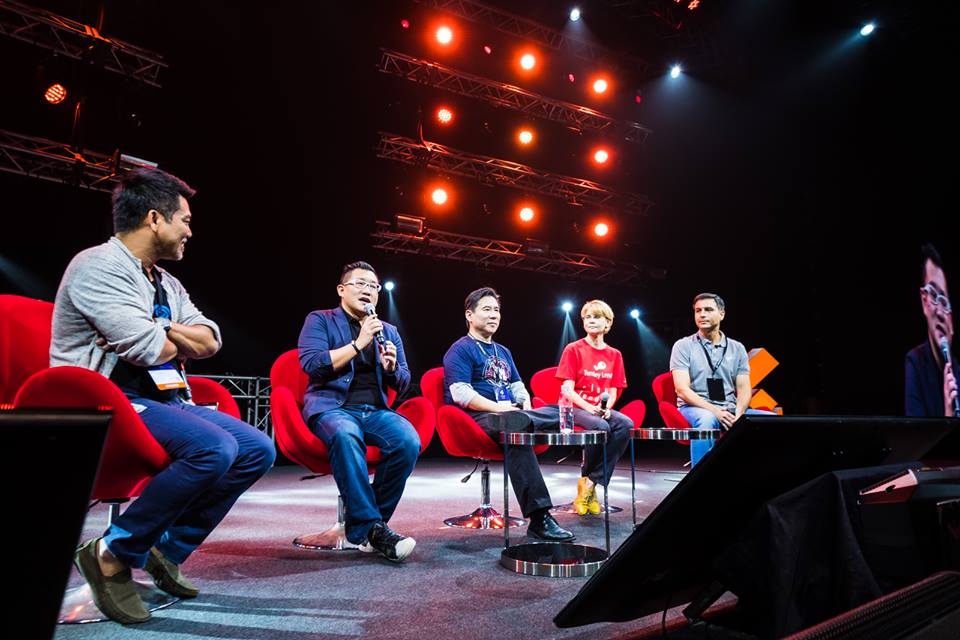