The celebration of the Thai Buddhist New Year, Songkran, is a time for family. It’s the time for reflection on the past year, for paying respect to elders, and preparation for the year ahead. Whether you were enjoying the water fights, travelling overseas or spending time with family; Thais flocked to Twitter to share their Songkran experience. This year’s #Songkran’s festivity generated 2.8 million Tweets (12-16 April). The conversation peaked on 13 April, around 6:00 pm, with 71,000 Tweets per minute. See how the conversation about this year’s Songkran’s celebration unfolded on Twitter from the below heatmap.

Known for their easy-going and friendly culture, Thais turned #Songkran into a fun time on Twitter with many of the popular Tweets centered around comedy and pop culture moments. The essence of modern Songkran was captured when a group of #Blinks danced to #blackpink’s record-breaking latest hit, #KillThisLove, in between the water fights. K-Pop is never far from Thai Tweeters’ minds and not to be outdone by the #Blinks, GOT7 (@GOT7Official) fans enjoyed an impromtu performance by Thai youngsters of the group’s 2016 hit song #hardcarry. This video Tweet has since been Retweeted more than 4,400 times with nearly 20,000 views. Whether you were traveling with family for Songkran holiday, spending some time with friends to be part of the water fights, or looking for some inspirations around Thailand this Songkran; hashtags proved a popular way for Thais to come together and share their Songkran experience on Twitter. 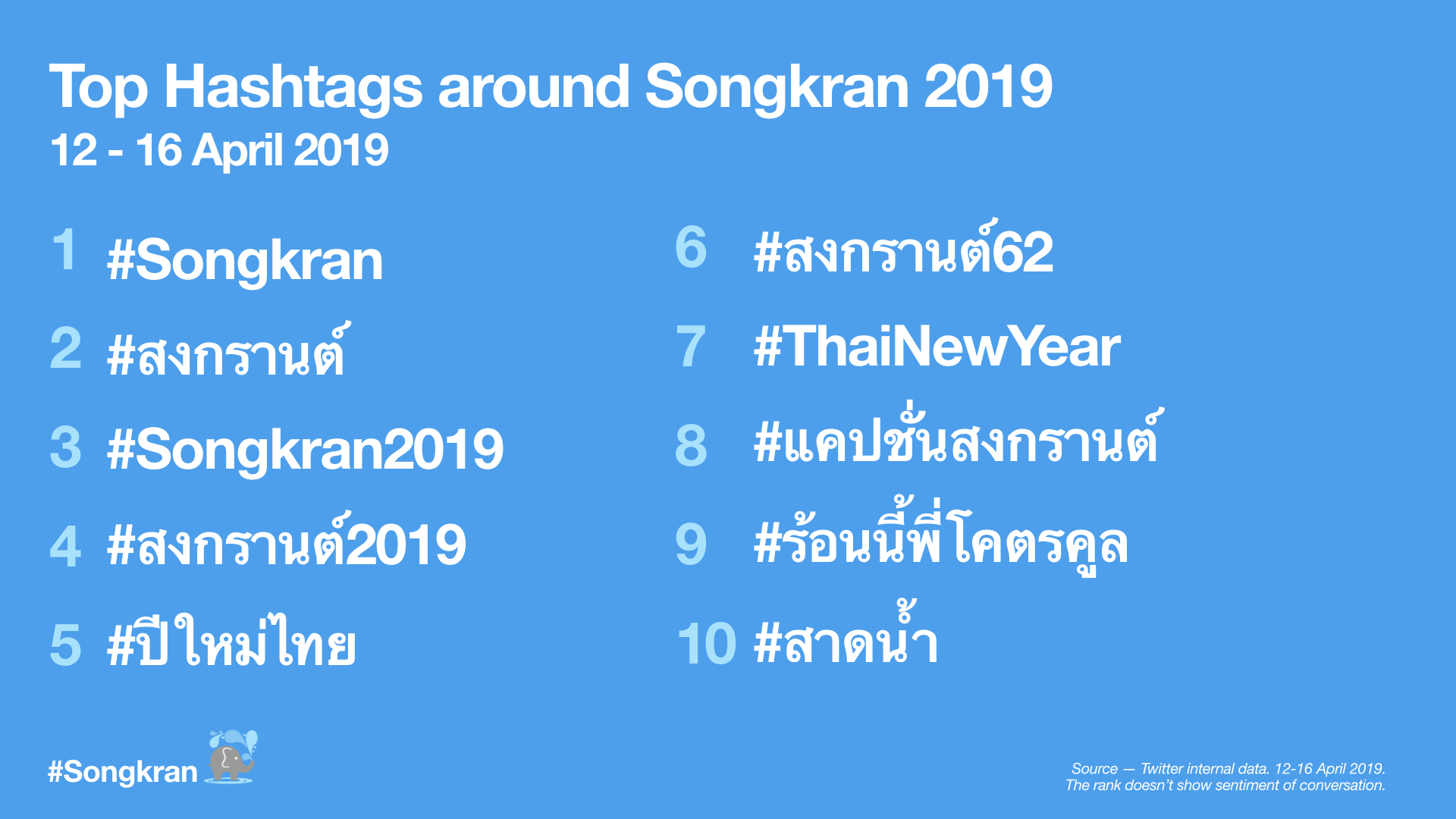 Language proved no barrier to Thai Twitter users as they Tweeted #Songkran to most popular hashtag on Twitter during this year’s celebrations. #Songkran2019 and #ThaiNewYear also proved popular and placed in the top 10 hashtags used 13 - 16 April, 2019. The top Thai language hashtag and second most popular overall was #สงกรานต์, the Thai language equivalent of #Songkran. The hashtag was used widely as a rallying cry to events and activities taking place all across Thailand. With temperatures soaring, #ร้อนนี้พี่โคตรคูล captured many people’s feelings about the scorching hot conditions and spawned some light-hearted humour Tweets and Memes.

With water and fun combining all over the country, it was no surprise to see water-themed emojis dominating the top five Tweeted during Songkran 2019. Meanwhile, Twitter joined in the festive occasion by launching the #Songkran emoji for the second time. People can Tweet with the #Songkran emoji using both English and Thai hashtags and the emoji is available until the end of this month: #Songkran, #ThaiNewYear, #สงกรานต์, #ปีใหม่ไทย. The emoji on Twitter depicts an elephant splashing water - paying tribute to Thailand’s national animal, and also highlighting the popular annual water fights enjoyed by both locals and tourists as a symbolic representation of purification and the washing away of one’s sins and bad luck.

There is no need to wait for the next Thai holiday, download Twitter to your smartphone now and be a part of the conversation wherever you go. As part of Twitter's work around World Mental Health Day, we are pleased to announce the launch of #ThereIsHelp notification service for suicide and self harm in Thailand, in partn...