Thailand's gaming scene is growing rapidly on the back of rising internet penetration and a bustling esports scene. Having evolved from gaming consoles in the 1990s to portable gaming in the 2000s, gaming really took off in Thailand with the rise of mobile gaming in the 2010s (think Wii, Candy Crush Saga, and Pokemon GO). With Twitter increasingly becoming the place to find gamers, Thailand ranked fourth in the world for conversations about gaming on Twitter in 2019. Thais enjoy a variety of games and gaming-types, with Animal Crossing, Fortnite and causal-type games being some of the most popular. The evolution of gaming has been rapid in recent years and this is expected to continue as gaming reaches out to new audiences. Thai gaming is set to hit the big screen in September 2020 with the launch of the movie Mother Gamer. Thai gamers and movie fans are already Tweeting in anticipation of its launch with the hashtags #MotherGamer and #เกมเมอร์เกมแม่. “We’ve seen tremendous growth of the gaming conversation on Twitter in Thailand. Online and offline, gaming is popular in Thailand and COVID-19 has pushed this growth even more. Gaming in Thailand is a social activity and this is highlighted in conversations that are engaging and connect gamers. Esports competitions are also growing in popularity and together with new titles coming and expanding interest in gaming amongst Thais, we expect the gaming conversation to continue to grow through 2020 and beyond,” said Martyn U’ren Head of Research at Twitter, APAC & MENA. While Twitter data suggests that gaming is increasingly gaining momentum, gamers are also turning to Twitter to talk about their passion, review games, connect with fellow gamers and socialise with friends. Here are three key insights into Thai gamers and gaming trends on Twitter in Thailand:

It’s not always about the results or the challenge. Gaming for many Thais has become a social activity, a way to connect with friends and families and this became even more so during the recent extended period of staying at home. Esports drove the trend of socialising through gaming with groups organising “esports from home” tournaments as a way to keep people connected, and #StayAtHome. Thai gamers were also seen Tweeting out looking for fellow gamers to join and play together during this time. 2) Gaming for leisure and to relieve stress

A recent Twitter study  found that over half of Twitter users in Thailand have played video games for “passing time”. This increases further when you look at Gen Z (58%) and Millennials (56%). With daily lives turned upside down during the recent pandemic, and the post pandemic “new normal” ever-evolving, people are to look for some normalcy in their daily lives. Gaming has provided that normalcy, it’s become an outlet of familiarity and part of many people’s daily routine. And with fear of stress growing amongst people staying at home, gaming has become a way of stress relief for some. 3) Gaming is popular with Gen Z and Millennials

In Thailand, 37% of Gen Z and 32% of Millennials played social, multiplayer games in the last 30 days , and with younger generations the key drivers of gaming conversations on Twitter in Thailand, more than one-third (34%) of Gen Z say that playing video games is their long-time hobby . Conversations range from the latest tips and tricks to sharing recommendations and their favourite streaming moments. 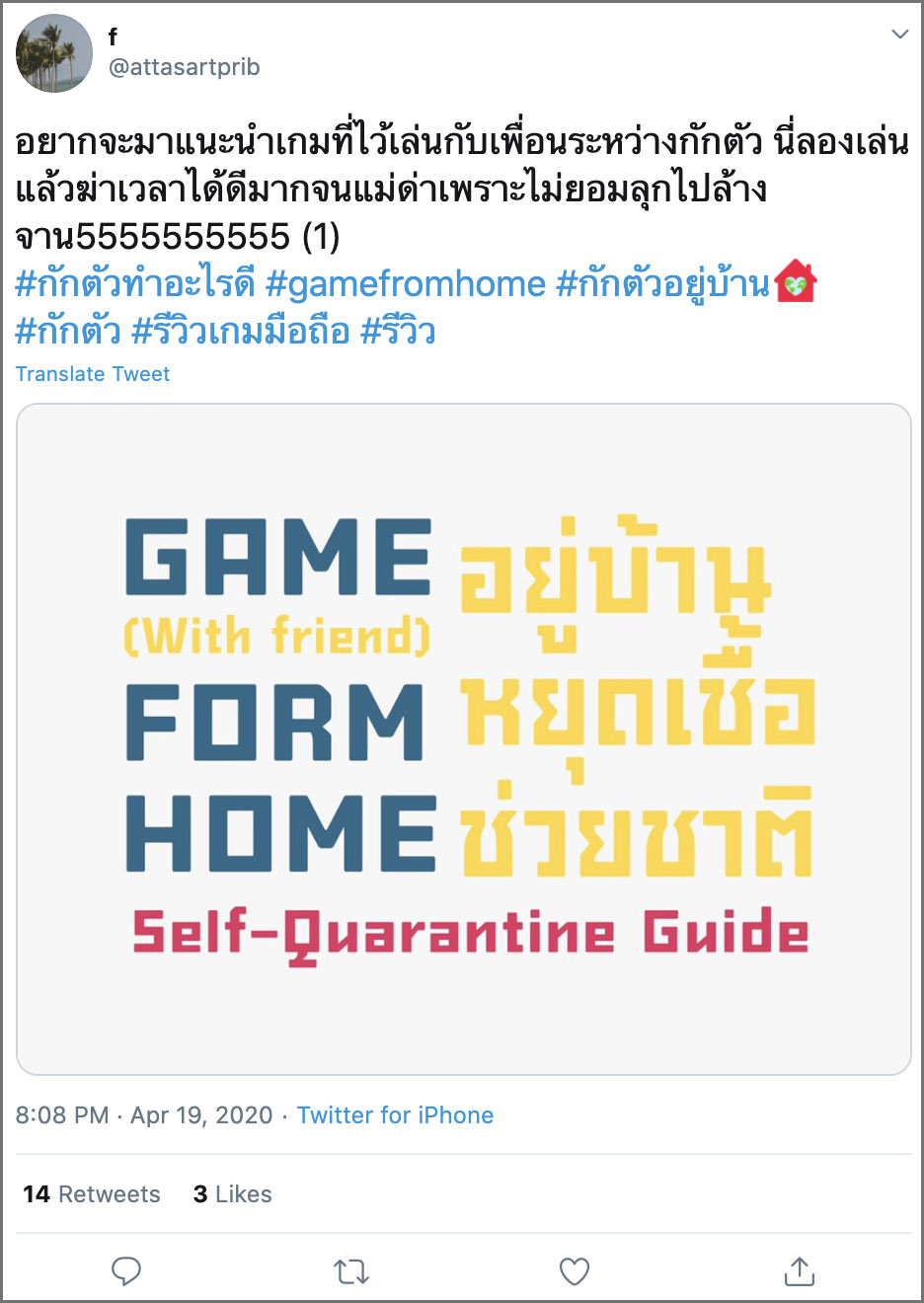 •    There’s a thriving community of gaming enthusiasts on Twitter in Thailand. Follow the conversations, learn the language and find out about the latest trends.

•    Join in. Using popular hashtags, join in the conversations about what’s happening in the gaming scene in Thailand, what the latest games, the most popular and more.

•    Learn from others. Gamers love to share tips and tricks, they also love to review games and share their thoughts on different types of games. Follow and learn from the community, find out what games suit you best, and have fun!

Gaming goes beyond entertainment; it’s a great way to engage with friends and make new connections. Here are some gaming hashtags to get you started on your gaming adventure on Twitter in Thailand: #เกมดีบอกต่อ, #รีวิวเกมมือถือ, #รีวิวเกม, #เกม, #แนะนำเกม. Tweet out and tag us at @TwitterThailand! 2020 was the year when #StayAtHome and #WFH became the norm. It was also the year when people played video games more than ever before and the first time there were more than 2 BIL... Twitter is the place for gaming conversation and connections, and 2019 was bigger than ever. In 2019 there were more than 1.2 Billion Tweets about gaming globally, up nearly 20% ye...