From War to Tech: Serbia’s Story

At the Web Summit 2018, Prime Minister of Serbia, Ms. Ana Brnabic discussed with Mr. Markus Preiss of ARD German TV, about Serbia’s development over the years. Having a sharp focus on education and digitalisation, Serbia is overcoming its historical challenges and paving its way to improve its future economy. 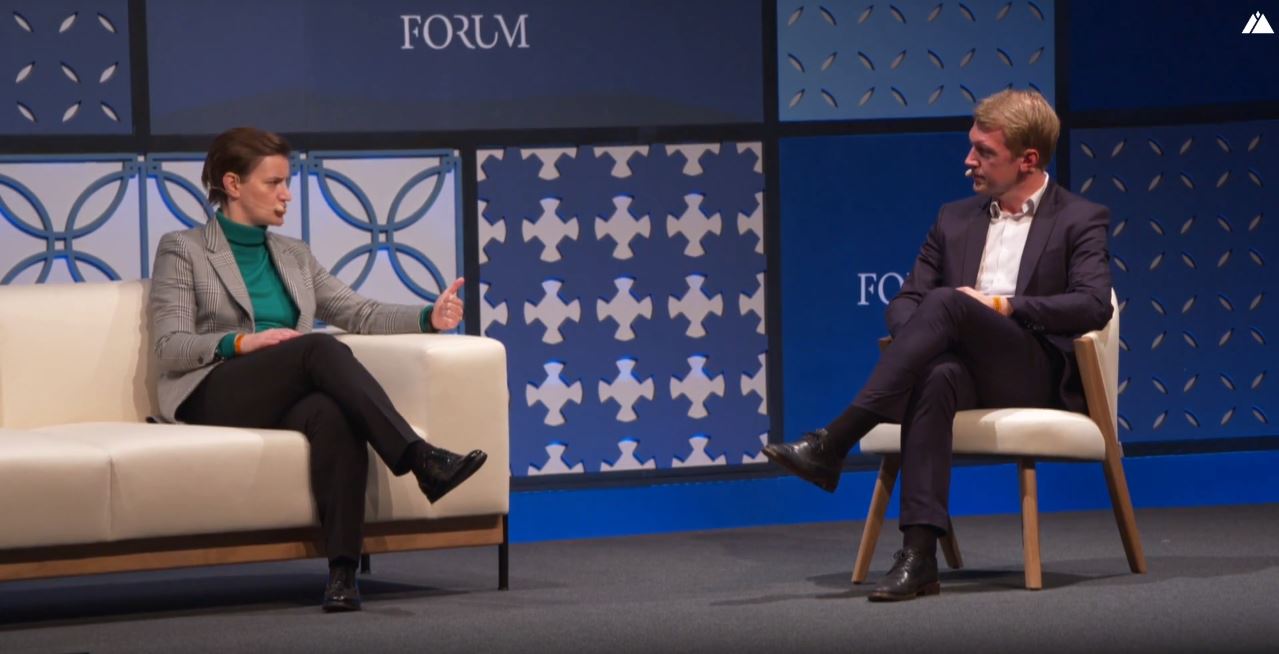 Why invest in Serbia?

Serbia has a huge talent pool, great potential, very good universities and strong education system, which is undergoing reforms to make these stronger, and it is an up and coming destination. It has a track record of very successful startup companies and research institutes. Currently, Serbian investors are said to be happy in the country and are planning to stay and expand.

How can you encourage companies to come?

5 years ago, Serbia was in a very difficult economic situation. It had a huge public deficit and unemployment above 25%. In 2014, with support from the international monetary fund, “we have successfully implemented these very difficult and non-popular reforms.”

In contrast to today, Serbia is in a very different situation, where unemployment is below 12%, its budget surplus is going to into its third consecutive year, public debt is decreasing and currently stands at about 56% of GDP, which is better than most EU countries. Serbia today is the economy that is investment driven, which is what it needed to do, because the unemployment was so high, labour intensive investments were necessary.

Moving forward, Ms. Ana believes that her government and personal responsibility is to change the economy, “to make this shift from investment driven, mostly driven by foreign direct investments, to innovation driven, the economy based on knowledge, innovation, startups, SMEs.” In the past 15 months, the government has initiated a comprehensive reform of education, children in schools learning Scratch and Python, about 5 times increase in specialized IT departments, introduction of digital textbooks, so that children have more fun in learning analytical and problem solving skills. Regardless of the government support, there are talented young people who have excelled. One of the 50 smartest companies in the world is found in Serbia, named the Seven Bridges Genomics, one of the best video gaming companies called Nordeus. Serbia is building the European Centre of excellence in Digital Agriculture, and “these are all the things that are not done through the government but really done through smart, educated, innovative, (and) creative people.”

Why do young people leave Serbia?

The country does have a brain drain issue, but it is much smaller than other countries in the region. Which is why its strategic focus on EU integration is important but also, the actual reforms on the European path are much more important than the quality and honesty of the reforms implemented. “I’m not worried about the dates, I’m more worried that we actually take things seriously and implement everything that we need to”, so that when the country is ready to join the EU, people would want to stay in Serbia.

Heavy investment also goes into education and simple infrastructure for startups and innovation, and Serbia’s current plan is to set aside 100million euros for them. By the end of the year, Serbia will be a full-fledged member of Saturn in Geneva, which means people will want to stay in Serbia and its universities, because “they will be able to participate in cutting edge R&D technologies.” All these are changing the perspectives and “I think we will see the brain drain turn into brain circulation, which is where I think you want to be. Brain circulation is the best thing for the country, because people are going out, they are seeing new things, they want to come back home” and Ms. Ana foresees more people coming back in the future.

How do you promote the tech industry in Serbia, despite perceptions of its safety, law and future with the EU enlargement?

The government fight perceptions with things like exit festival, which is voted the best festival in the world for the second time. People who are coming in to Serbia see a very different image of the country. It is a very safe place, where there is not a lot of crime, a relaxing place, good quality of life, and the government is trying to promote that.

Ms. Ana expressed her two key priorities as a PM: digitalisation and education. Due to the last couple of decades Serbia went through, it has innovative and resourceful people, and also people who are not very used to respecting the institutions. They are more used to disruption, and that can be used to Serbia’s advantage in the 4th industrial revolution: creativity, innovation, resourcefulness, disruption. Hence, Ms. Ana said that there is a huge chance of changing Serbia in the next couple of years.

What kind of roles must government play these days to attract business?

In the past 15 months, the creative and IT industries developed without much of the Serbian government’s support. The IT sector is growing above 20% annually, and at about 30% this year. The creative industry employs more than 100,000 people in Serbia, with a population of 7 million. “This all was done without government really paying attention or providing any kind of legal framework, so they can work better.” Ms. Ana approach is to just support them, not interfere, to ask these people what they need from the government to grow even more, be even faster, more efficient, and more competitive globally. “Then I thought, together, we will do wonders.” The next initiative in January will be the introduction of a set of tax incentives, stimulation measures for people and companies investing in innovation and research development in Serbia to boost the country further.

Are subsidies, low wages and debt the main selling point for Serbia compared to other EU countries?

“Actually no, I think especially for the innovation driven industry, the wages are comparable to many other countries.” Serbia is more value for money because the education is good and people are creative and innovative. Moreover, the cost of life in Serbia is much lower, and in terms of purchasing power, it is very competitive. “Investors coming into Serbia really fall in love with the people and the experience of Serbia, and we just need to promote that further beyond.”

From a government’s perspective, who are your competitors, and who do you admire for their strategies?

Different countries are looked into for different things. As for digitalisation in government, e-government is very important to Ms. Ana. “We are making this push from taking the government from analog government to e-government, which I think is really the best answer for more efficient, more transparent government and predictable government.” The best way to fight corruption is providing simply more electronic services to citizens and businesses. For example in the e-government, Serbia look towards Austria, because it is an institutionally similar setup country. When Ms. Ana was still the minister of administration in Vienna, she would look at how others do it, then do it in Serbian flavor. In the IT sector, she would rely a lot on the basic resourceful knowledge of her own people, who would tell her what has to be done. As there was a huge growth in the IT community, people would persuade the IT council to not interfere as they are successful because the government had got nothing to do with them.  “We really needed to work through this, we needed to build trust so we are not interfering, but actually out there asking people who know better than we do as the government what needs to be done.” Digital Serbia, based on the digitalswitzerland, shows how Serbia learns from different places. Ms. Ana believes that it is a very competitive world and they need to do our best every single day, run as fast as they can to catch up in order to become one of the leaders of the 4th industrial revolution.

Apart from e-governments, in terms of creating an attractive environment, who is good in Europe?

“In general, Europe is perhaps a little bit too conservative, we are trying very hard not to over regulate, I still believe in deregulation and leaving it to people themselves to do whatever they do best.” Europe has fantastic tools such as Horizon 2020 for R&D, but all of these need to be more visible. Compared to China and US, Europe is not unified, there are different countries which are members of the EU, hence, Ms. Ana thinks that there should be a stronger common European spirit in innovation. Are you prepared for the problems in joining the EU?

EU is ready for enlargement, but another important thing to ensure is the readiness of the countries to join the EU. If the countries are not ready to join the EU, or did not implement reforms, “just basically went through this ticking the box exercise of opening and closing chapters”, then a lose-lose situation will surface. This will result in noncompetitive economy and agriculture, and a huge problem with brain drain. By ensuring that Serbia is indeed ready to join the EU, joining the EU will be an additional advantage to prior initiatives in strengthening Serbia, making it a win-win situation for EU and Serbia.

“It’s a very difficult job, and 2025 is a very ambitious deadline. We are running very fast and trying to do it. But I’m not worried about 2025, I’m more worried that as a result we have this strong economy, microeconomic stability, transparent efficient public administration, and rule of law.” All these things make up the country which is then ready to join the EU.

Apart from tech, how are you going to resolve Kosovo?

Politically speaking, it is the most complex and emotionally difficult issue that Serbia has at hand. Up until a couple of years ago, under the leadership of the Serbia’s President, the country started thinking about how to leave the issue behind and turn fully towards the future.

A dialogue with Pristina has started in which Ms. Ana hopes that “at some point in time will result in a normlisation agreement in the long term peace and stability which is the precondition for prosperity.” Being often stuck between the 21st century politics and economy, something that Serbia is doing today, and the 19th century politics of what is going on in terms of incidents, Ms. Ana points out that it is the not the best pace to move forward in terms of what the citizens need.