We love Shenzhen. Sure, Beijing has Zhongguancun and Shanghai has its international and diverse entrepreneurial community. But Shenzhen has a certain je ne sais quoi, an energy that pervades the entire city. Maybe it’s the great weather or maybe its youth of the city (both the residents and the age of the city itself), but every time we come to this southern city, we’re amazed by the people, projects, and companies thriving here.

And this year was no different, from blockchain smartphones to battling robots, from hackathons to VC speed dating, TechCrunch Shenzhen saw over 8000 attendees and 150 startups showing off their stuff. It was a whirlwind of great ideas and a glimpse into the future of technology in China.

Here are some highlights from the 4-day conference (check out our Twitter or #tcshenzhen for more):

Teams of 4-6 people—some total strangers before the hackathon—came together to create proofs-of-concept to complete blockchain challenges. Winners included teams who came up with novel ways to record transactions, verifying the history of vaccines, preventing payment fraud, and—of all things—a hardware controller for CryptoKitties as well as a Pokemon Go-like game for the crypto pet platform.

Spanning two days and covering a wide range of topics, the main stage saw some of China’s leading technologists and businesspeople talk about where the cutting edge is, for both consumers and businesses. Huami Corporation’s Chairman and CEO Wang Huang spoke on the future of wearable devices. Huami, a Xiaomi eco-chain company, listed on the New York Stock Exchange in February this year. As of last year, Huami shipped 18.1 million units of smart wearable devices globally and had recorded a total register use base of 56.1 million. The once low-profile Chinese flexible display company Royole grabbed headlines over the past two weeks, becoming the first company to launch a foldable smartphone.

While the smartphone-tablet hybrid stoked much anticipation among flexphone aficionados, for Royole CEO Bill Liu, this is just the beginning. For him, the potential of flexible display technology is great and expands far beyond the world of smartphones. Phil Chen, the decentralized chief officer at HTC, spoke about the company’s much-hyped blockchain phone and its shifting focus to blockchain and crypto.

So, is the blockchain-powered phone a hype or it is something potentially revolutionary?

Chen said with crypto and blockchain he saw, for the first time, tech’s potential to disrupt big centralized companies. Smartphones are the most accessible and ubiquitous devices where most of our data is generated, Chen said. What do fighting robots and hip hop have in common? According to the CEO of media company The Makers (创客星球), Archie Ru, they’re both niche interests with the potential to gain big audiences among China’s youth. “Consumer-driven companies, and startups too, could hand over fundamental research work to professional tech teams. Efforts saved shall be paid to implementations,” Liu explained, adding that it is China’s diverse use cases that encourage companies to adopt data supported implementations. Amid headlines of the impending arrival of autonomous vehicles (AVs) on China’s roads, Michael Shu, general manager of the Auto Intelligent Ecology Institute at Chinese automotive manufacturer BYD, says the technology should be viewed with a level head.

“We need to look at self-driving cars with a calm eye,” he told attendees at TechCrunch Shenzhen today (November 19). “Driverless cars need to become more mature, rules and regulations still need to be formulated, and ethical issues need to be solved.” Speaking on the sidelines of TechCrunch Shenzhen 2018, Toa Charm, chief public mission officer for the innovation and digital tech hub, said closer collaboration is needed in order to realize the full potential the GBA represents for sectors such as fintech.

For the third time in a row, TechCrunch in China hosted a blockchain side stage. Covering topics from the bearish market to government application, from blockchain security to payments, the side stage provided a comprehensive overview of the current state of the industry and technology. “One day in crypto is like a year in any other technology space.”

This time last year, Bitcoin’s value was close to $10,000. After the value peaked, however, it and other cryptocurrencies have seen a rocky slide south. As of Tuesday afternoon, Bitcoin had dropped below $4,500 and set a new low for this year. But panelists at TechCrunch’s blockchain side stage remained largely optimistic. One of the many promises of blockchain technology is that it allows users to store and exchange valuable information in a secure and tamperproof way. But how secure is blockchain really? Blockchain is the best mechanism currently available to deal with the problems in the supply chain, said senior advisor at Fantom Foundation Dai-Kyu Kim. His comments come at a turbulent time for the global supply chain.

Startup Alley was perhaps the most fun of the entire conference. Spread between the two stages, startups showed off their latest and greatest products. Here are some highlights from our Twitterfeed (check out #tcshenzhen for more):

Over 20 different VC funds and over 120 entrepreneurs met at TechCrunch Shenzhen for “speed dating” sessions. Each entrepreneur had the chance to pitch their big idea to some of the best VCs in China.

Out of 300 contestants, 20 finalists, and 100 thousand online votes, 12 teams took the stage to pitch their ideas to our panel of experts. 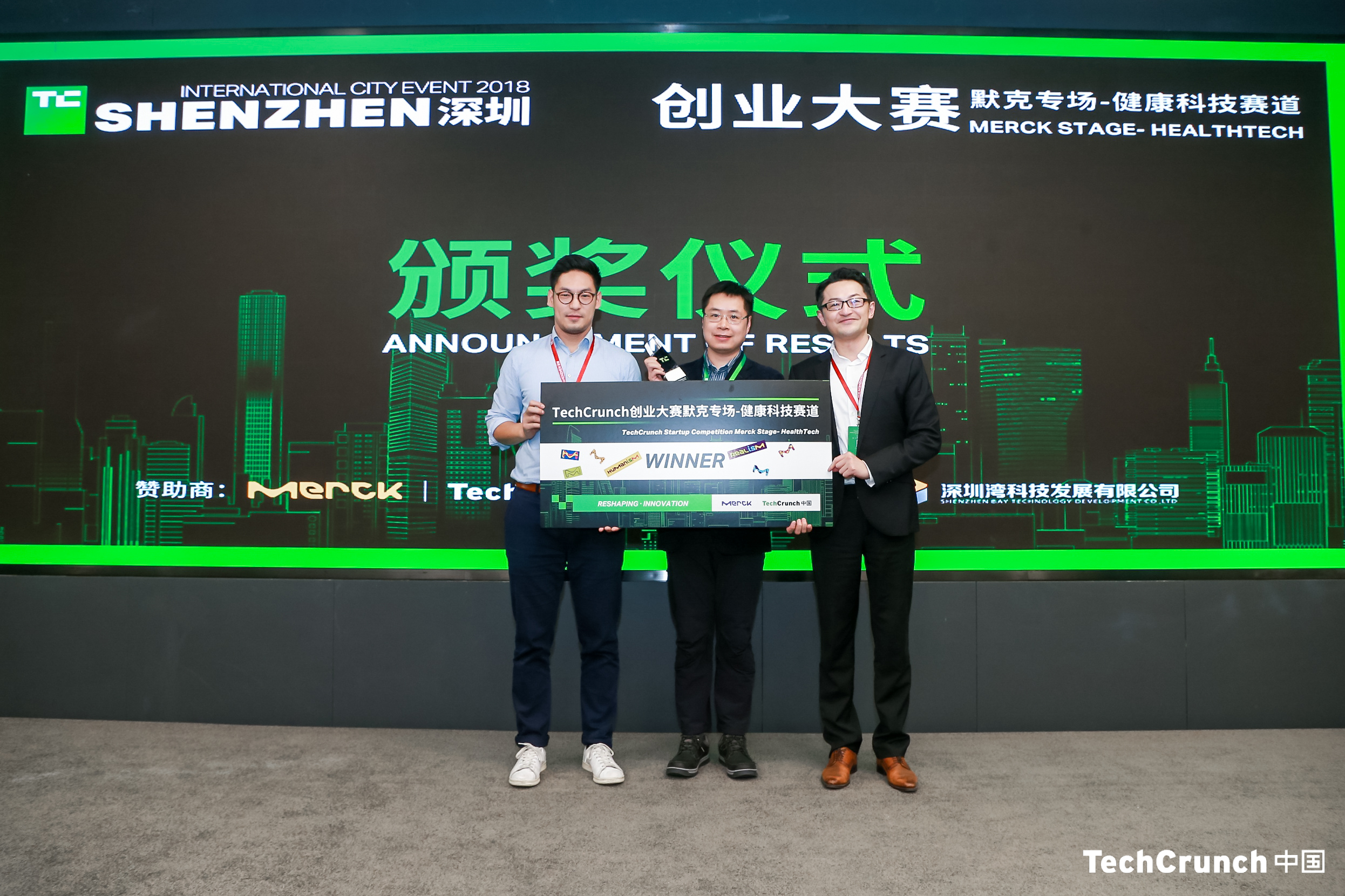 China’s younger generation of academics is adopting a more open mindset and willing to embrace these opportunities. The trend is best demonstrated at the healthtech stage of TechCrunch 2018 Startup Competition.

A total of 12 projects demoed at the event, which is sponsored by Merck, a leading science and technology company in healthcare, life science, and performance materials.

The winner of the competition will be shortlisted as a candidate for Merck China Accelerator, a program that focuses on collaboration between startups and Merck’s innovation ecosystem.

Hackathon is back on TechCrunch Shenzhen

All coders, designers, makers in Shenzhen, China: if your inner beings are to code, design, build and hack things in a cool way; if you want to have fun with someone like you to sp...